On 15 June 2018, Parliament adopted the new statute of limitations aimed at better protecting the assertion of claims for long-term damages against limitation. The main points are the extension of the brief relative period of limitation and the introduction of a twenty-year long absolute period of limitation in the event of death and bodily harm. The regulations concerning the suspension and interruption of limitation have also been changed. 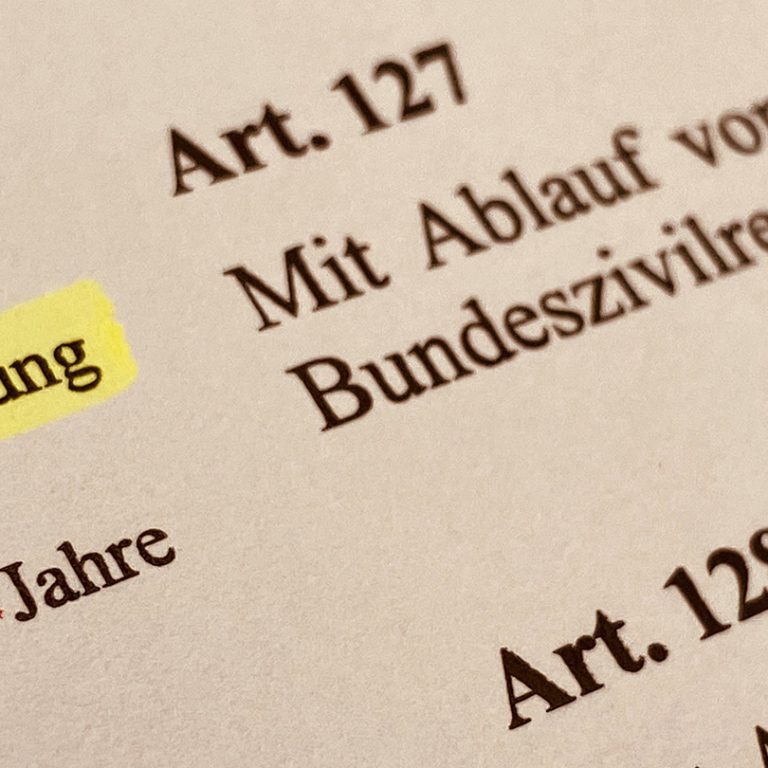 New period of limitation for Switzerland – Will it finally make it possible to claim compensation for long-term damages in court?

The term “long-term damages” means that the actual damage resulting from a violation in contract or in tort is only discovered after a long period of time has passed. One good example is the numerous asbestos-related cases, when the injured parties only suffered damages several decades after the actual exposure. The current statute of limitations only provides insufficient protection in the event of such long-term damages, as the absolute period of limitation is de lege lata limited to 10 years. One important element of the proposal was therefore the extension of the period of limitation to satisfy claims from tort or unjust enrichment law.

Under the revised law, claims for damages and compensation can be asserted for losses of purely financial nature, for personal injuries and for property damages within 3 years of the damages and the injuring/damaging party being identified (new Article 61 Section 1 of the Swiss Code of Obligations (OR)). Up until now, this was only possible within 1 year of identification because the mentioned relative period of limitation expired afterwards.

The absolute periods of limitation have been at least increased for claims resulting from bodily harm inflicted to or the killing of a person, so-called personal injuries. It has been increased from 10 to 20 years, counting from the day on which the damaging actions took place or ceased (new Article 61 Section 1bis of the Swiss Code of Obligations (OR)).

This change is a welcome one, seeing as a judgement passed by the European Court of Human Rights as long ago as 2014 (Moor vs. Switzerland from 11 March 2014) already concluded that a period of limitation of ten years was to be considered too short in the case of asbestos victims. However, it remains to be seen in future litigations whether it was reasonable to change the old fixed period of limitation to a new period that may now be longer, but that is still fixed in the revised statute of limitations.

Barely any changes to contract law

Companies and business people that can become subject to claims due to personal injuries, e.g. doctors, are therefore advised to keep their business records for 20 years from now on in order for them to have proof that can be used for their defence if needed.

Waiver of objections resulting from expiry of the period of limitation

The revision of the statute of limitation has ultimately introduced a new provision, according to which the limitation during the time of settlement talks, mediation proceedings or other proceedings aiming at extrajudicial dispute resolution is suspended, provided this has been agreed by the Parties in writing (new Article 134 Section 1 (8) of the Swiss Code of Obligations). However, in contrast to e.g. Germany, the limitation is not automatically suspended when extrajudicial dispute resolution endeavours are initiated. Much rather, an according written agreement is assumed.

Unlike in the case of the waiver of objections resulting from expiry of period of limitation, a limitation suspension can be agreed in advance, prior to the start of the period of limitation. For example, in the event of a legal relationship, it would be possible to include dispute resolution clauses in the contract in question (e.g. a purchase agreement) and to combine them with a provision concerning limitation suspension (e.g. at the initiation of settlement talks).

In other words, even under the new law, the limitation period for a claim for damages might expire, even prior to the damages manifesting themselves.

Therefore, the revised statute of limitation does not completely solve the problem of asserting claims in connection with long-term bodily harm. However, the situation is somewhat alleviated thanks to the longer periods of limitation.